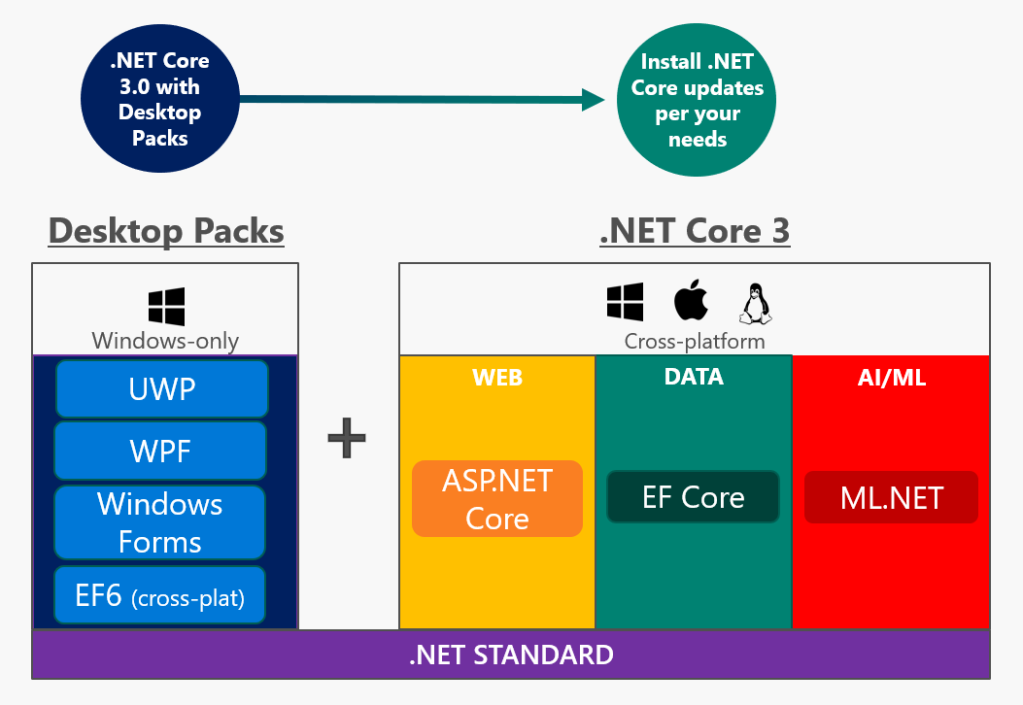 We can start updating existing projects to target .NET Core 3.0. This release is compatible with previous versions, makes updat easy.

Windows Desktop apps are now supported with .NET Core and open source, for both Windows Forms and WPF. The WPF designer is available in Visual Studio 2019 16.3, is still in preview and available as a VSIX download.

These APIs are built from scratch on top of Span<T> and use UTF8 under the covers instead of UTF16 (like string). So, these minimize allocations, resulting in faster performance, and much less work for the garbage collector.

Raspberry Pi and ARM chips are now supported to enable IoT (The internet of things) development, including with the remote Visual Studio debugger. You can deploy apps that listen to sensors, and print messages or images on a display, all using the new GPIO (General Purpose Input/Output) APIs. ASP.NET can be used to expose data as an API or as a site that enables configuring an IoT device.

Now, the version APIs provided with .NET Core 3.0.0 return the information as we are expecting. For example:

There is also a type System.Range, which contains two Index values, one for the start and one for the end, and can be written with a x..y range expression (C#). We can use Index here with a Range, which produces a slice:

For more information, see the ranges and indices tutorial.

See, both production and consumption of async streams in the following exmample where the foreach statement is async and itself uses yield return to produce an async stream for callers. This pattern (using yield return) is the recommended model for producing async streams.

In addition to being able to await foreach, we can also use to create async iterators, for example, an iterator that returns an IAsyncEnumerable/IAsyncEnumerator that we can both await and yield in. To dispose objects, we can use IAsyncDisposable, which various BCL types implement, such as Stream and Timer.

As .NET develpers have largely relied on Json.NET and other popular JSON libraries, which continue to be good choices. Now, Json.NET uses .NET strings as its base datatype, which is UTF-16 under the hood. The new built-in JSON support is high-performance, low allocation, and based on Span<byte>.

It focuses on making some thing easier with implicit yield expressions and some syntax relaxations. It also includes support for LangVersion, and ships with nameof and opening of static classes in preview. The F# Core Library now also targets .NET Standard 2.0.

In past releases, apps needed to be launched via the dotnet command, like dotnet myapp.dll. Apps can now be launched with an app-specific executable, like myapp or ./myapp, depending on the operating system.

.NET Core 3.0 is now supported on the following operating systems:

.NET Core 3.0 is a major new release of .NET Core which includes an extensive set of improvements, like the reduction in size of the SDK, and by greatly improving support for key scenarios like containers and Windows desktop applications. I hope this article will help to get an overview of this release.